St. Patrick's Breastplate is a popular prayer attributed to one of Ireland’s most beloved patron saints. According to tradition, St. Patrick wrote it in 433 A.D. for divine protection before successfully converting the Irish King Leoghaire and his subjects from paganism to Christianity. This prayer is called "St. Patrick's Breastplate" because of those parts of it that seek God's protection. It is also known as "The Deer's Cry" or "The Lorica". This is the version that we as Celtic Monks have chosen to memorize and pray in the morning upon awakening.

Saint Patrick's Breastplate, a Prayer of Protection, also known as The Deer's Cry, The Lorica of Saint Patrick or Saint Patrick's Hymn, is a lorica whose original Old Irish lyrics were traditionally attributed to Saint Patrick during his Irish ministry in the 5th century. Mar 17, 2013 · According to the Catholic Encyclopedia: “The beautiful prayer of St. Patrick, popularly known as ‘St. Patrick’s Breast-Plate,’ is supposed to have been composed by him in preparation for this victory over paganism. The following is a literal translation from the old Irish text...”.

Mar 17, 2018 · The prayer is known as "Faeth Fiada" or the "Lorica of St. Patrick" (St. Patrick's Breast-Plate) was first edited by Petrie in his "History of Tara." Below, hear a BBC recording of "a broadcast Author: Irishcentral Staff. St. Patrick's Breastplate is contained in the ancient Book of Armagh, from the early ninth century, along with Patrick's authentic "Confession." St. Patrick is said to have written this prayer to strengthen himself with God's protection as he prepared to confront and convert Loegaire, high king of Ireland. 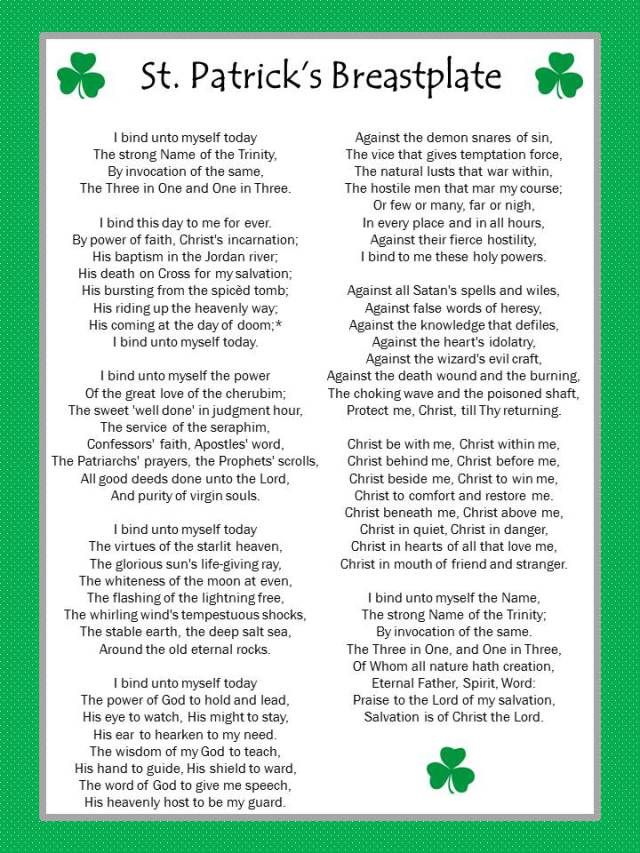 The beautiful prayer of St. Patrick, popularly known as "St. Patrick's Breast-Plate", is supposed to have been composed by him in 433 A.D. in preparation for his victory over Paganism. This prayer is often called “St. Patrick’s Breastplate” because it seeks God’s protection in a world of both tangible and invisible dangers. Though Patrick of Ireland lived more than 1500 Author: Mark Herringshaw.